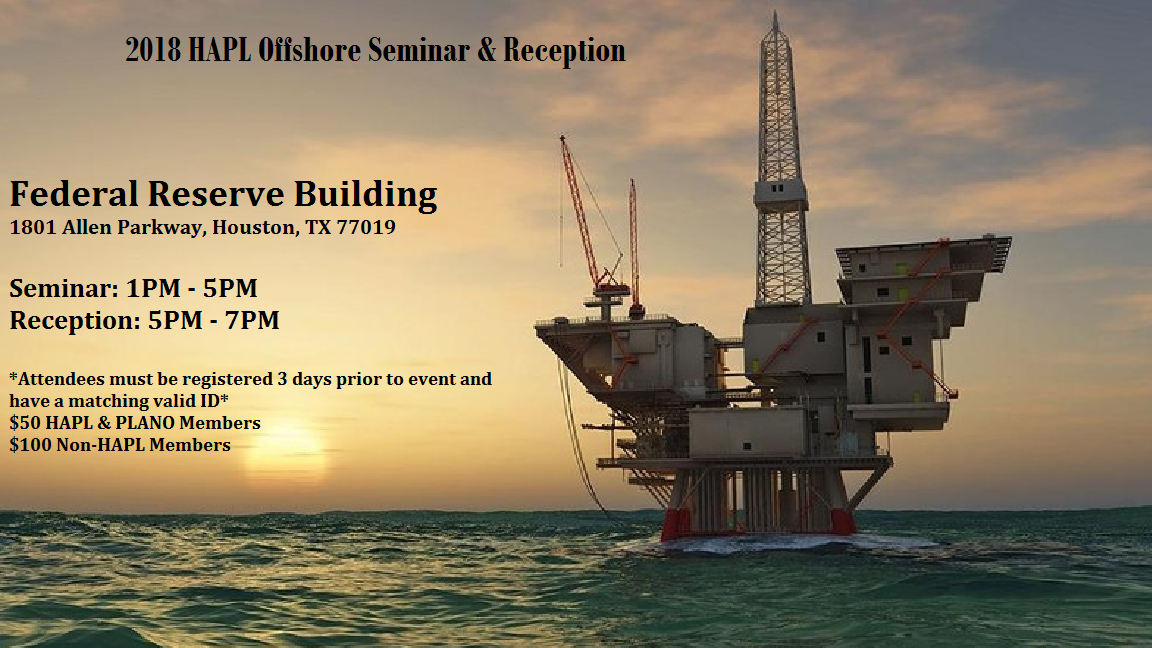 If you make a reservation, pay for it, and later decide to cancel it before the reservation deadline, October 29, 2018, you can apply for a refund through the HAPL Office.   We must receive your request to cancel your registration in writing by email at hapl@hapl.org or fax at  713-622-3723.  You will receive the total amount charged minus a $5.00 credit card processing fee.

When you request a refund, include the confirmation e-mail you received when you paid. If you have lost that e-mail, send as much information as you can about the name and date of the event, the date that you paid, and how much you paid.  Refunds cannot be made for reservations that were paid for, but not cancelled before the reservations deadline. When that happens, you are considered a no-show.
All pre-registered members/guests for this event that have not prepaid and do not attend will be billed as a no-show.

Speaker Poe Leggette - C-Head, Energy Team at Baker & Hostetler LLP
Poe Leggette has represented IPAA for twenty-five years.  I want to reflect briefly on what he has done for the Association and for many of its members during that time. His successful litigation has saved our industry what the government estimates to be over 25 billion dollars.  Those successes include: ...

Poe Leggette has represented IPAA for twenty-five years.  I want to reflect briefly on what he has done for the Association and for many of its members during that time.

His successful litigation has saved our industry what the government estimates to be over 25 billion dollars.

*        His initial win for this Association in 1996, when a court of appeals rejected the government’s claim to a royalty share in our members’ settlements with interstate pipelines overs their take-or-pay obligations.  Those claims were already over one billion dollars—and growing—when the court ruled.

*        His successful defense, in the late 1990s, of some IPAA members in claims that they had cheated on royalties by using posted prices to value royalty on oil.

*        His successful challenge under the Deepwater Royalty Relief Act.  There, the government had tried to limit the royalty relief by spreading it out over the area of an offshore field instead of granting it lease by lease.  He successfully avoided Supreme Court review, even though the government told the Court the financial impact of denying review would be 20 billion dollars.

*        He successfully challenged the government’s claim that lessees cannot deduct firm demand charges paid to interstate pipelines from their royalty payments.  The court agreed those were deductible transportation costs.  Hundreds of millions of dollars have been saved.

*        In a friend of the court brief for this Association, he helped persuade the Supreme Court in 1999 that gas in coal seams on federal lands belonged to the owner of gas rights, not to the owner of the coal.  That ruling cleared the way for CBM development in large parts of the American West.

*        In a friend of the Court brief for IPAA, he helped persuade the court of appeals that Interior could not ignore sales to affiliates in determining the royalty value of natural gas from federal leases.

(2) on compelling BLM to speed approval of APDs, and

(3) on the federal government’s right to allow its lessees access across the surface where the surface estate is privately owned.  That victory was particularly significant because the favorable opinion was written by then-Judge Neil Gorsuch, a noted champion of private property rights.

*        Most recently, he and his partner Mark Barron successfully challenged the Obama Administration’s hydraulic fracturing rule, and are now defending the Trump Administration’s repeal of the rule.  IPAA estimates savings of $200 million a year from blocking the Obama rule.

*        Two final points.  First, Poe is the only lawyer I know of to have a court rule that the Interior Department’s Minerals Management Service violated the Due Process Clause of the Constitution.  Second, he has been very generous with his time in support of IPAA.  In recent years, he has given us several hundred thousands of dollars in free legal advice on lawsuits, Congressional testimony, and industry comments on proposed rulemakings.

For an industry that faces the challenges of market volatility, organized opposition, and excessive regulation, Poe has championed access and the fight against unnecessary and costly burdens on your operations.

Poe, you have been a great friend to IPAA and its members.  We want to recognize your twenty-five years of service.

Speaker Kevin Bruce – Director, Government & Industry Affairs at Fieldwood Energy LLC
Kevin has more than fifteen years of legal, government, and regulatory experience and joins Fieldwoodfrom America’s Natural Gas Alliance (“ANGA”), where he led efforts to grow markets for natural gasacross an eleven-state region. Prior to his time at ANGA, Kevin was a Senior Government & RegulatoryAffairs Advisor at Encana Corporation. ...

Kevin has more than fifteen years of legal, government, and regulatory experience and joins Fieldwood
from America’s Natural Gas Alliance (“ANGA”), where he led efforts to grow markets for natural gas
across an eleven-state region. Prior to his time at ANGA, Kevin was a Senior Government & Regulatory
Affairs Advisor at Encana Corporation. He was also an attorney at Galloway, Johnson, Tompkins, Burr &
Smith in New Orleans after serving as a legislative aide on Capitol Hill in Washington, DC. Kevin earned
his J.D. from Louisiana State University’s Paul M. Hebert Law Center and a B.A. from Southern Methodist
University.

Tracy W. Krohn, age 61, has served as Chief Executive Officer since he founded W&T Offshore, Inc. in 1983, as President from 1983 until 2008, as Chairman of the Board since 2004 and as Treasurer from 1997 until 2006.  Tracy has been actively involved in the oil and gas business since graduating with a B.S. in Petroleum Engineering from Louisiana State University in 1978. He began his career as a petroleum engineer and offshore drilling supervisor with Mobil Oil Corporation. Prior to founding the Company, from 1982 to 1983, Tracy was senior engineer with Taylor Energy. From 1996 to 1997, he was also Chairman and Chief Executive Officer of Aviara Energy Corporation in Houston, Texas. In 2013, Mr. Krohn was appointed to serve on the board of directors of the American Petroleum Institute.

He enjoys several philanthropic pursuits including T.E.A.C.H. (To Educate All CHildren), Memorial Hermann Hospital, I AM WATERS, EASTER SEALS and others.

Nadège joined Bradley Murchison Kelly & Shea LLC firm’s New Orleans office as Special Counsel in 2018.  She concentrates her practice in the areas of Oil & Gas Law and Energy Law, offshore and onshore, including title examination, the acquisition and disposition of Oil and Gas properties, and general commercial transactions. She advises Upstream and Midstream companies on a broad range of legal, commercial, and Federal and State regulatory compliance matters in support of energy resource exploration, development and production. She regularly represents clients before Federal and State agencies such as the Bureau of Ocean Energy Management (BOEM), the Bureau of Safety and Environmental Enforcement (BSEE), the Interior Board of Land Appeals (IBLA), and the Louisiana Mineral and Energy Board. She also has subject matter expertise in rendering legal opinions on complex mineral and surface titles in Louisiana and on the Outer Continental Shelf.

Prior to joining the firm, Ms. Assalé worked for several years as a Commercial Representative/Landman with Shell Exploration & Production Company, overseeing the governance and prosecution of a number of Oil and Gas contracts and agreements related to Shell’s assets in the Gulf of Mexico (Offshore, Shelf and Deepwater, US), and in Canada (Onshore, Alberta Province - Southern Alberta, and Offshore, Nova Scotia Province - Sable Island), as well as the divestiture of assets in said regions. Ms. Assalé is a native French speaker from Côte d’Ivoire.

Drivers license will be required to attend. Must be registered to attend 3 days prior to the event.