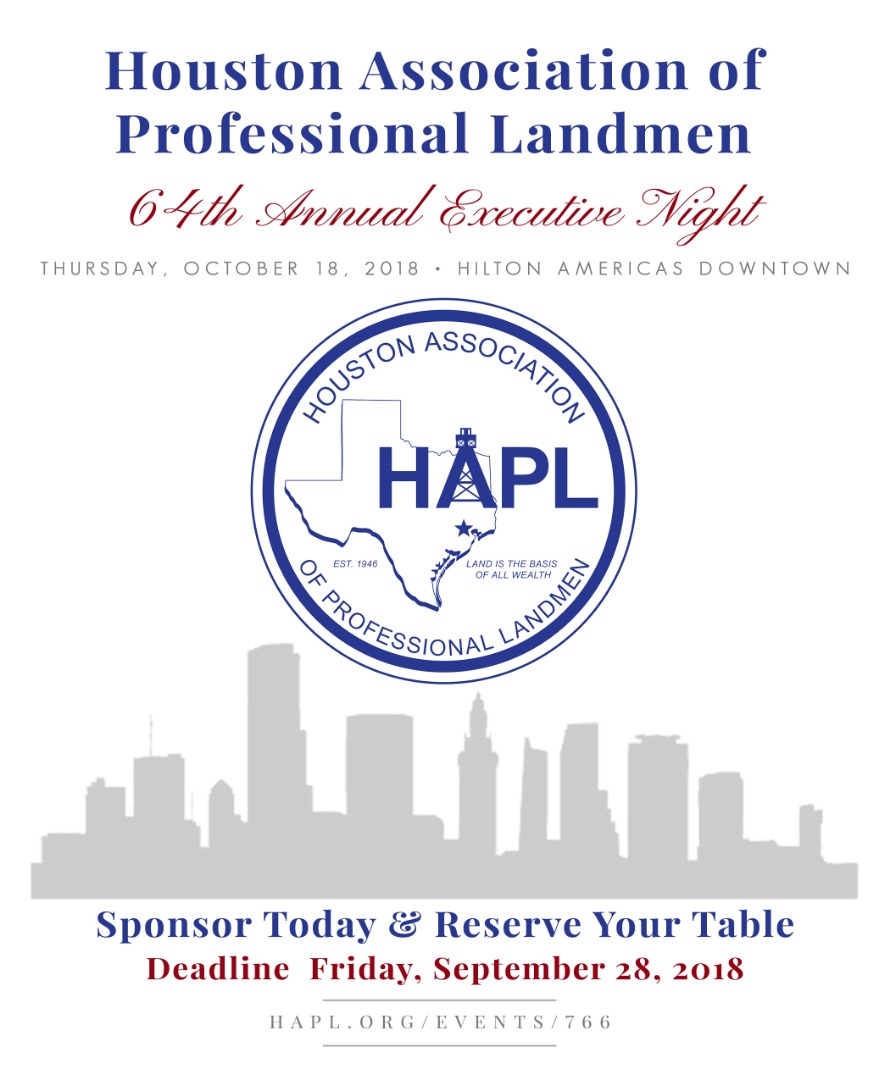 The HAPL is excited to announce Michael Grimm, President of Rising Star Petroleum, L.L.C. and the immediate Past Chairman of the Board for RSP Permian, Inc., as this year’s Executive Night keynote speaker!

Executive Night sponsors will be displayed on sponsor boards, in the evening’s event program, in the HAPL Monthly Newsletter, and on projector screens during dinner.   Diamond Level sponsors and above will have the option of reserving a table(s) for their company: Diamond (1), Platinum (2), Social (3). Each table seats ten (10) people.

If you would like to sponsor, please visit the event page at https://hapl.org/sponsorships/event/766/. We ask that all contributions be submitted prior to Friday, September 28, 2018.  If you have any questions, please contact Daniel Negron, Executive Night Chair, at (972)-898-4112 or danielnegron03@gmail.com or Erica Adkins at (832)-486-2485 or erica.adkins@conocophillips.com. Don’t forget to register to attend the event after signing up to sponsor.

If you make a reservation, pay for it, and later decide to cancel it before the reservation deadline, October 11, 2018, you can apply for a refund through the HAPL Office.   We must receive your request to cancel your registration in writing by email at hapl@hapl.org or fax at  713-622-3723.  You will receive the total amount charged minus a $5.00 credit card processing fee.

When you request a refund, include the credit-card number that you used to pay for the reservation and the confirmation e-mail you received when you paid. If you have lost that e-mail, send as much information as you can about the name and date of the event, the date that you paid, and how much you paid.  Refunds cannot be made for reservations that were paid for, but not cancelled before the reservations deadline. When that happens, you are considered a no-show.
All pre-registered members/guests for this event that have not prepaid and do not attend will be billed as a no-show.

Speaker President of Rising Star Petroleum, L.L.C. - Michael K. Grimm
Michael K. Grimm is currently President of Rising Star Petroleum, L.L.C.. He is the immediate Past Chairman of the Board for RSP Permian, Inc.  Prior to being named Chairman, Mr. Grimm was a Co-Founder of RSP Permian in 2010, and served as a Co-Chief Executive Officer until 2014. From 2006 ...

Michael K. Grimm is currently President of Rising Star Petroleum, L.L.C.. He is the immediate Past Chairman of the Board for RSP Permian, Inc.  Prior to being named Chairman, Mr. Grimm was a Co-Founder of RSP Permian in 2010, and served as a Co-Chief Executive Officer until 2014. From 2006 to 2017, Mr. Grimm has served as President and Chief Executive Officer of Rising Star Energy Development Company, and from 1995 to 2006, he served as President and Chief Executive Officer of Rising Star Energy, L.L.C., which he co-founded in 1995. From 1990-1994, Mr. Grimm was Vice President of Land and Exploration for Placid Oil Company. Prior to that, Mr. Grimm was employed for 13 years in the Land and Exploration Departments for Amoco Production Company in Houston and New Orleans. Mr. Grimm has more than 41 years of experience in the oil and natural gas industry and currently serves as a Director of Energy Transfer Partners, L.P. (ETP/NYSE), since December 2005. He also serves as Chairman for the Audit and Compensation Committees for ETP.

Mr. Grimm has been and is active in the following industry organizations:


Mr. Grimm graduated with a BBA/PLM Degree from the University of Texas at Austin in 1977 and is a member of the Silver Spurs Hall of Fame.