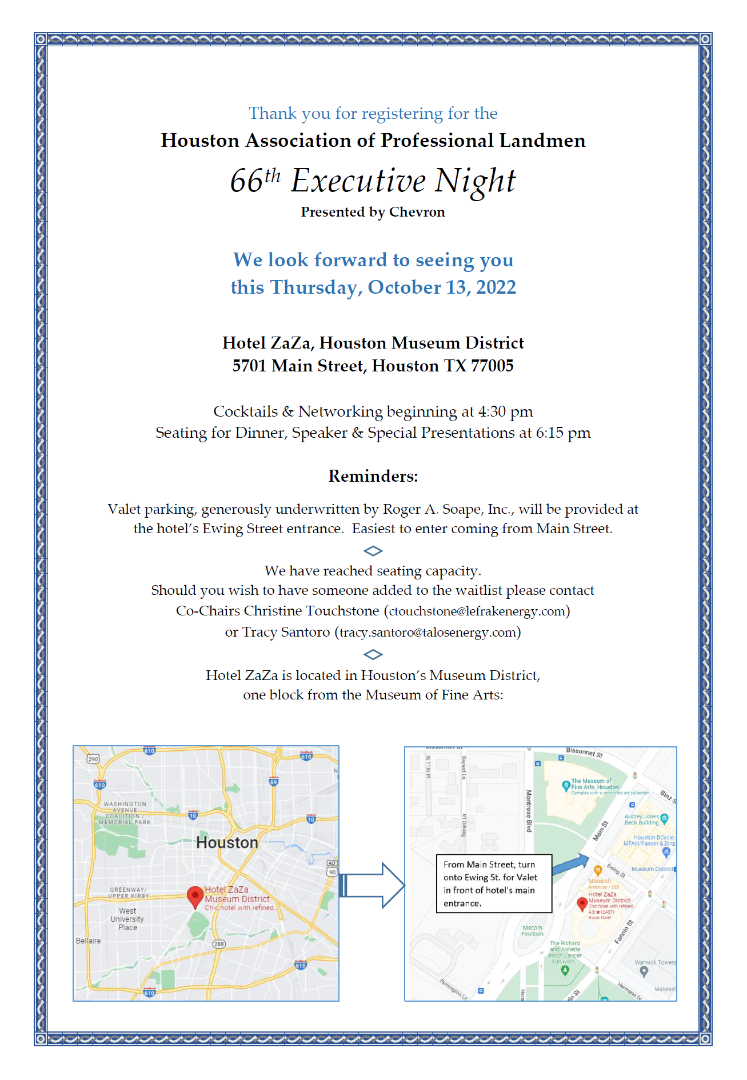 Cocktail Reception will begin at 4:30 p.m.  (2 drink tickets provided) followed at 6:15 p.m. by seated dinner, presentations, and a special guest speaker.  Valet parking will be provided. 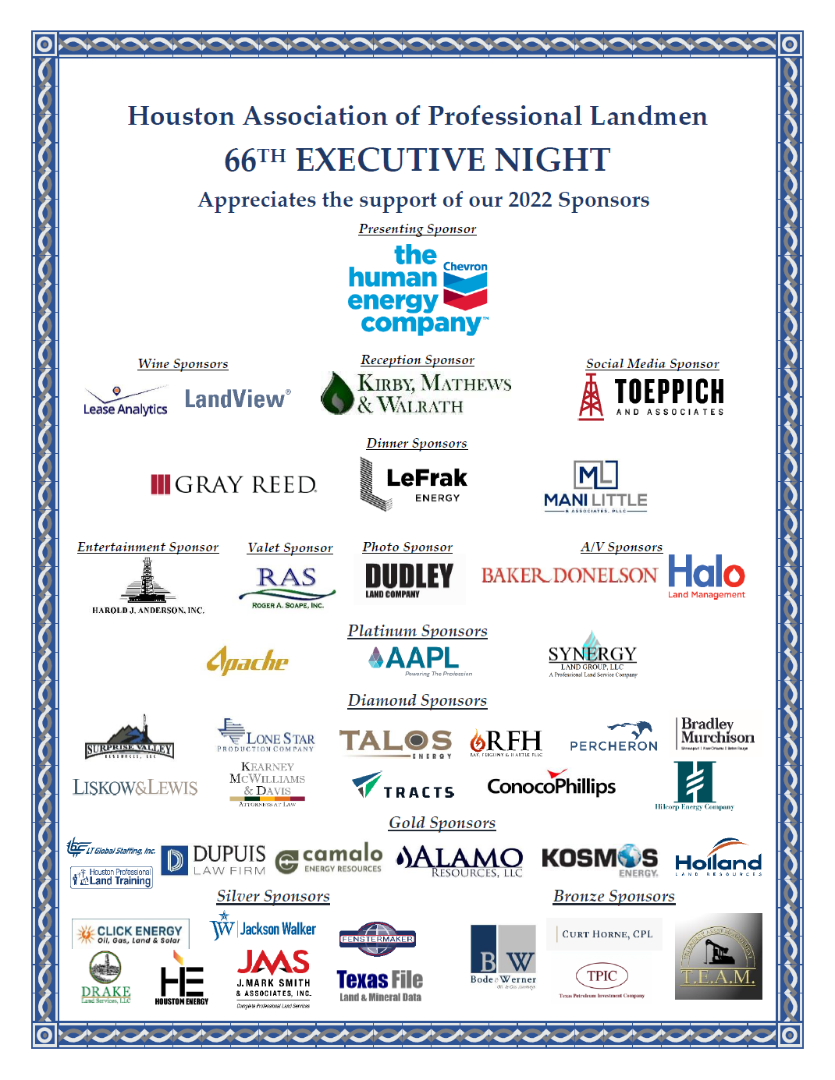 If you make a reservation, pay for it, and later decide to cancel it before the reservation deadline, you can apply for a refund through the HAPL Office. We must receive your request to cancel your registration in writing by email at hapl@hapl.org or fax at 713-622-3723.  You will receive the total amount charged minus a $5.00 credit card processing fee.  The deadline for this event is Monday, October 3, 2022.

When you request a refund, include the name and date of the event, and how much you paid.  Refunds cannot be made for reservations that were paid for, but not canceled before the reservations deadline. When that happens, you are considered a no-show.
All pre-registered members/guests for this event that have not prepaid and do not attend will be billed as a no-show.

Harold Hamm founded Continental Resources in 1967 and is Chairman of the Board of Directors.

Growing up in rural Oklahoma, Mr. Hamm went to work in the oil fields as a teenager and established Continental Resources in 1967 at the age of 21. He built a grassroots startup into an NYSE-traded, Top 10 oil producer in the U.S. Lower 48. As a voice for America’s oil and natural gas industry and as the leader of one of America’s top E&P companies, he has helped to make America energy independent.

Mr. Hamm also co-founded and serves as Chairman of the Domestic Energy Producers Alliance, which aims to preserve the millions of jobs and billions of dollars in economic activity and tax revenues generated by onshore drilling and production activities within the United States. Through his work with DEPA, Mr. Hamm is widely recognized as the man who led the charge to lift America’s 40-year-old ban on U.S. crude oil exports.

Mr. Hamm’s industry leadership also includes serving as past Chairman and present board member of the Oklahoma Independent Petroleum Association, as a founding board member of the Oklahoma Energy Resources Board, and as past president of the National Stripper Well Association. In addition, he served as Founder and Chairman of Save Domestic Oil Inc., which successfully brought a trade case against four countries trying to put American oil and gas producers out of business.

A national leader in promoting health, education, and energy industry advocacy, Mr. Hamm has devoted much time and resources to championing a healthy and secure future for all Americans. With the goal of finding a cure for diabetes, he has donated more than $65 million to date to the world-renowned Harold Hamm Diabetes Center at the University of Oklahoma. The Harold Hamm Diabetes Center is at the forefront of diabetes research – inspiring progress toward a cure, education of health care professionals and families, optimal care for those living with diabetes, and effective prevention strategies. To further spark the minds of the world’s brightest scientists, he established the Harold Hamm International Prize for Biomedical Research in Diabetes, a $250,000 biennial award celebrating the scientific achievements of an outstanding researcher, team of researchers, or research institution.

Mr. Hamm is dedicated to preparing the next generation of energy industry leaders. In 2012, he helped establish the Harold Hamm School of Geology and Geological Engineering at the University of North Dakota. He has also funded numerous education initiatives across the nation, including college scholarships, classroom technology, and school capital campaigns.

Mr. Hamm has received numerous awards and recognition for his contributions. Platts Global Energy Awards honored him with a “Lifetime Achievement Award” for his legacy of leadership, innovation, and commitment to bringing America to energy independence. Platts Global Energy Awards also has named him “CEO of the Year” and at the same time named Continental Resources “Energy Company of the Year.”

He was named the recipient of the “Chief Roughneck Award” by U.S. Steel Tubular Products, and one of 13 corporate and civic leaders across the U.S. to receive the “Horatio Alger Award” for his outstanding leadership and triumph over adversity to achieve success. He was also honored by Oil and Gas Investor magazine as “Executive of the Year” for Continental’s leadership in the Bakken, SCOOP, and STACK plays and his tireless efforts to lift the ban on U.S. crude oil exports. In 2015, the Western Energy Alliance named him “Wildcatter of the Year” for his contributions to America’s energy security and the betterment of society. He has been named one of TIME magazine’s “100 Most Influential People in the World” for his creation of thousands of jobs in the oil industry and continuous support of education and diabetes research. He was inducted into the Oklahoma Hall of Fame, and named the International Energy Policy Conference “Energy Advocate of the Year” as well as being named the Ernst & Young “Entrepreneur of the Year.”

Tickets will be sold on a first come first served basis based on seating availability. Register early to claim your spot!