Join us for our Joint November Luncheon with LOGA at the Petroleum Club of Houston, sponsored by Fenstermaker. Check-in starts at 11:30 am and lunch will be served at noon. 1 RPL/CPL credit will be available.

Become a member today to receive a discount on future luncheons.
Apply Online For Membership 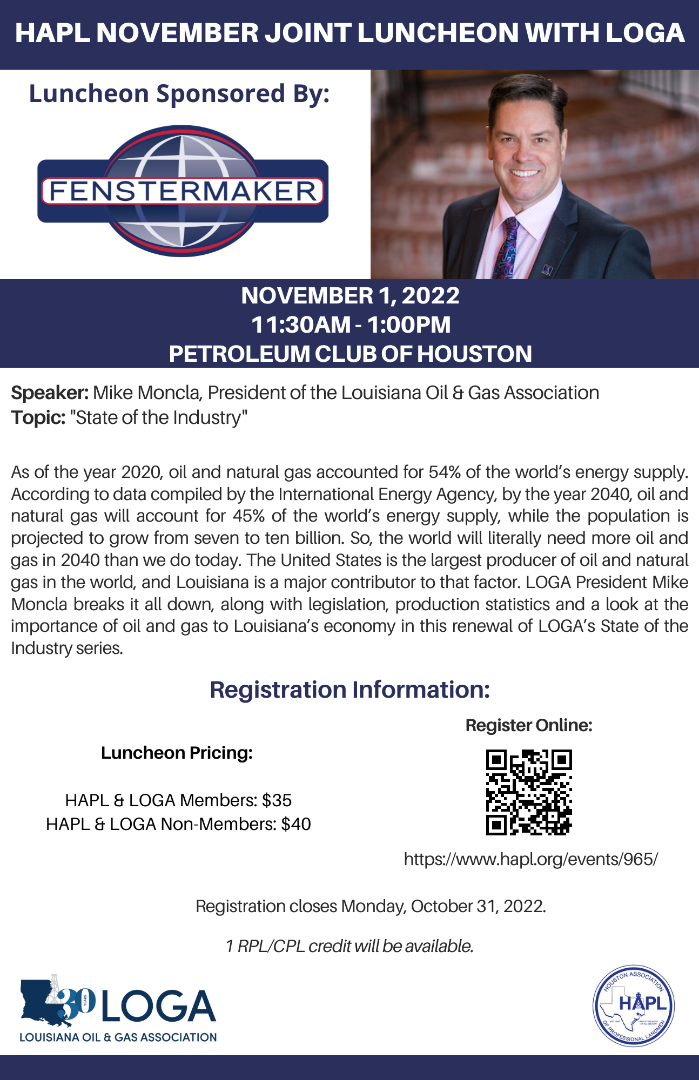 If you make a reservation, pay for it, and later decide to cancel it before the reservation deadline, you can apply for a refund through the HAPL Office.   We must receive your request to cancel your registration in writing by email at hapl@hapl.org or fax at  713-622-3723.  You will receive the total amount charged minus a $5.00 credit card processing fee.  The deadline for this event is Friday, October 28, 2022.

Speaker Mike Moncla
Mike is a 1990 graduate from USL (now UL), with a degree in Business Administration. After college, he obtained a job at Reed Tool Company as a bit salesman and worked in both Lafayette and Houma. In 1994, Mike joined forces with his father’s business, Moncla Well Service, a workover ...

Mike is a 1990 graduate from USL (now UL), with a degree in Business Administration. After college, he obtained a job at Reed Tool Company as a bit salesman and worked in both Lafayette and Houma.

In 1994, Mike joined forces with his father’s business, Moncla Well Service, a workover company with seven workover rigs. For the next 15 years, Mike, his father Charlie, and the rest of the Moncla clan grew their family business through 11 acquisitions into the largest privately owned workover company in the United States. Mike was Chief Operating Officer for the business that serviced seven different states. In 2008, Moncla Companies sold its business to Key Energy Services, where Mike then served as Division Manager for Key Energy’s Southeastern Division. In 2010, Mike, along with his two brothers & uncle, got back into the family business again by purchasing their previously owned 6 workover barges back from Key Energy. Since that time, they have grown and diversified their business through several acquisitions.

Currently, Mike serves as CEO for his third generation family workover business, Moncla Companies, LLC. Mike is currently on the executive board for LOGA, on the board for LAGCOE, the chairman of the Lourdes Foundation, and serves on the Foundation Board for St. Thomas More Catholic High School. He is a Eucharistic Minister at Holy Cross Catholic Church. He is married and has one daughter.