Join us for our February Luncheon at the Petroleum Club of Houston. Check-in starts at 11:30 am and lunch will be served at noon. We hope to see you there! 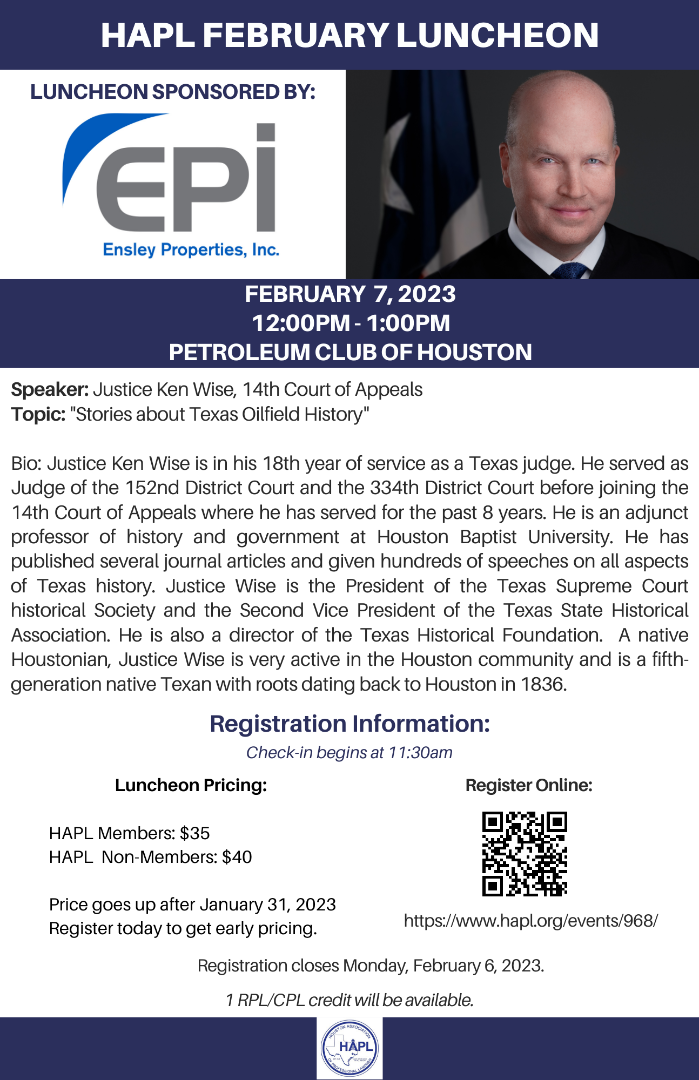 Become a member today to receive a discount on future luncheons.
Apply Online For Membership
If you make a reservation, pay for it, and later decide to cancel it before the reservation deadline, you can apply for a refund through the HAPL Office.   We must receive your request to cancel your registration in writing by email at hapl@hapl.org or fax at  713-622-3723.  You will receive the total amount charged minus a $5.00 credit card processing fee.  The deadline for this event is Friday, February 3, 2023.

Speaker Justice Ken Wise
Justice Ken Wise is in his 18th year of service as a Texas judge. He served as Judge of the 152ndDistrict Court and the 334th District Court before joining the 14th Court of Appeals where he hasserved for the past 8 years.  Justice Wise earned his bachelor’s degree from Texas ...

Justice Ken Wise is in his 18th year of service as a Texas judge. He served as Judge of the 152nd
District Court and the 334th District Court before joining the 14th Court of Appeals where he has
served for the past 8 years.

Justice Wise is very active in the service of the bar and the judiciary. He is a member of the
Texas Judicial Council, which sets policy for the Texas judicial system. He co-chaired a State
Bar task force that conducted the first complete study of the Texas Court system since 1892. He
served two terms on the Texas Access to Justice Commission. He has also served as a visiting
judge in counties across the State of Texas. Justice Wise is an elected member of the prestigious
American Law Institute, where he focuses on the laws of policing and the law of American
Indians.

Justice Wise is an avid Texas historian. He hosts the award-winning Texas history podcast Wise
About Texas which has been heard by over 1.2 million people in 152 countries worldwide and is
ranked in the top one-half of one percent of podcasts worldwide by ListenNotes.com. He is an
adjunct professor of history and government at Houston Baptist University. He has published
several journal articles and given hundreds of speeches on all aspects of Texas history. Justice
Wise is the President of the Texas Supreme Court historical Society and the Second Vice
President of the Texas State Historical Association. He is also a director of the Texas Historical
Foundation. He is also a member of the Delegados Board of the Bryan Museum in Galveston,
Texas.

Ken is a fifth-generation native Texan with roots dating back to Houston in 1836, and has one
daughter, Sarah Jane Wise.